This past April I wandered achingly around the London Book Fair, like all 24,000 attendees, perhaps, with an overwhelming awareness that there might be MUCH to gain, personally and professionally, if only! If only I knew where to stop, who to talk to, what to see. A gnawing awareness that I coulda-shoulda-woulda planned it better, done it differently if only… It’s one thing to agonize after the fact, but this awareness in situ really sucks. Even wearing my favorite new multicolored Missoni-esque blazer from Positano didn’t alleviate the gnaw.

I’ve done the American Booksellers Association Convention, now called BookExpoAmerica, many times as an exhibitor, (big huge exhibits I planned and executed in Chicago, New York, Miami, LA… ) and I’ve walked LBF and numerous other trade shows. I’m not intimidated (well, not too, too much), and I don’t tire out. By the end of the day, I’m a happy pack mule with bags of books, catalogs, business cards, and new friends. But every single time, I’m crawling with that weird false FOMO… despite the fact that often my favorite encounters that turn into great contacts – sometimes even contracts –– are with people I meet standing at a tall table eating tacos. Or in the line for the ladies room. Chance. Every time, good stuff comes when you’re not looking.

At LBF 2015 I went totally without agenda because right now I am both writer and publisher, and I wear a few other hats too. I wanted to wander. Two friends I’d met at the International Conference for the Short Story in Vienna last summer would be there, and I hoped to find them. I did. We were near the Middle Eastern Publishers Hall. Two people reached for the same book on a display at Alma Books. One hand was mine, the other was the hand of my Swedish friend Anna Solding, who runs MidnightSun Publishing in Australia. She and Lucy had been there all morning and had walked half the floor. I’d walked the other half, and lo and behold, we met in the middle. They’d stopped because Alma Books had published one of Lucy’s stories a few years ago, and she wanted to meet them. I’d been drawn by a beautiful cover on display. Chance.

I had a review copy of MAILBOX in my bag. This novel sprang directly from a well that ran deep in Vienna. Anna blurbed it, in fact. I was eager to show them. One scene in particular had never raised any question or comment by my editors, beta readers or blurbers, but pre-pub, it was driving me crazy. I worried whether it was off-base… the whole scene, including some vaginal stuff, from a 13-year-old’s perspective. Lucy flipped through the book as we stood there, and she turned to that exact scene, (that exact scene!) read it, laughed out loud, said it resonated, said it was exactly right and true of her own childhood (years later and half a world away from my own). Again – chance. Had I asked someone to read that scene, and they’d answered, yes, yes, it’s true, it’s fine, it reads right, Nancy you’re so brilliant..., it would never have meant as much to me as Lucy Durneen’s serendipitous thumbs-up.

Another thing that came of that day’s tour of LBF was a moment at a tiny booth set up by two charming women from Poland, running the internet readers’ forum BookLikes. Impressive stats there. I was intrigued. I made a note to look into it later to run a promotion for MAILBOX.

Now it’s the end of August, my sons are heading back to school, and they just ran a promotion for MAILBOX. We included BookLikes and Goodreads in the efforts, running giveaways in both venues… still going in fact, if you’d care to click them. These readers’ forums are by no means the same thing. Goodreads is American, longer established and easier to navigate. It currently has 896 readers hoping to win my book. BookLikes has lower numbers but a certain fabulous authenticity about it that drew me in right away. Only 14 people have clicked to win MAILBOX there, but I get access to all of their names, their profiles, their book reviews and passions. It’s like the difference between doing a big speech from a well-lit stage, even for people you know want to hear what you’re saying, versus hanging out at a party as an invited guest, being approached consistently by interested people. I will happily send my books to the winners in both venues. I understand the business theories of critical mass and I know the numbers at Goodreads look great, but both matter. And what floats your boat on a day-to-day basis might just be the one-on-one, the slow-down-and-take-note conversations, the small, intimate, chance encounters. Especially if you’re a writer.

But here’s what made me sit down to write this blog, if we can call it a blog. In navigating BookLikes, I found an intriguing book about Warsaw I wanted to win, called SWANS ARE FAT TOO by Michelle Granas. The site won’t let you enter a giveaway until your profile is somewhat complete. (“Fill up your profile,” it insists). I had 90 books already catalogued there but I hadn’t reviewed them, so I played around the site a bit and did some of that. I still couldn’t click to win the Swans. I had to also write a blog post in BookLikes. I dashed something off about not really being a book blogger, titling the post “Rotten Blogger.” I clicked to win the Fat Swans and happily saw my own smiling mug come up registered. With my new name “Rotten Blogger.” Evidently my blog post title was now the title of my BookLikes blog, and therefore the title of me. I back-peddled fast and got that changed to “Nancy Freund LikesBooks.” I’m not saying I’m a stellar blogger, but using “Rotten Blogger” as my formal name in a readers’ forum seemed ill-advised.

But it got me thinking. I looked at my stats from my actual blog – this one – that I so rarely write. 40% of my website traffic comes to this silly blog. Why would this be the thing people click? My “Press” tab – so earnestly sought and achieved – gets a fraction of the attention. I had a 20-minute interview on RAPESEED with BBC Radio, for goodness sakes! My piece on variant synaesthesia is in The Daily Mail! GLOBAL HOME COOKING won the Eric Hoffer Prize Honorable Mention! Get over it, Nancy, no one cares.

So I realized something that the rest of indie publishing knows, but I’ve been too block-headed to hear. People want to know the real you, Madame Writer. The blog. The web-log of day-to-day stuff going on. Pull back the curtain, take off the make-up, let your hair down, and write what’s real in your real life, not just the slick stuff that’s supposed to sell books. Normally, I am a pretty approachable person, I think, in real life. Freund in name and nature. If people want to come hang out and have a coffee after spinning class, all sweaty, no agenda, just friends for a chat, I’m there.

It’s true, I am a rotten blogger -- or I have been. I tweet and tumble and Instagram and pin. I’m on Facebook a ton, but I didn’t get the whole thing with blogging. Now, suddenly, thanks to those two gals from BookLikes, I’m starting to… Watch this space. It ought to be fun. 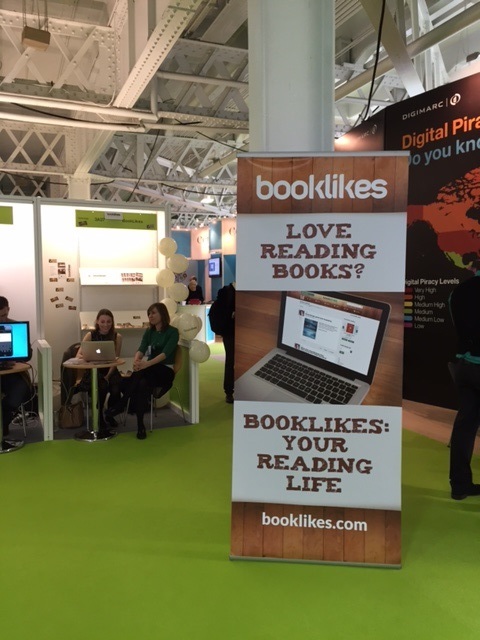 ABOVE: The wonderful little BookLikes Booth at LBF. Of course I stopped!

BELOW: That night's mini Vienna reunion in London.  You can see my favorite jacket in action (cool, huh?) and Anna, Lucy, and Jeremy Osborne, all eager to hear Vanessa Gebbie do a reading in Notting Hill. 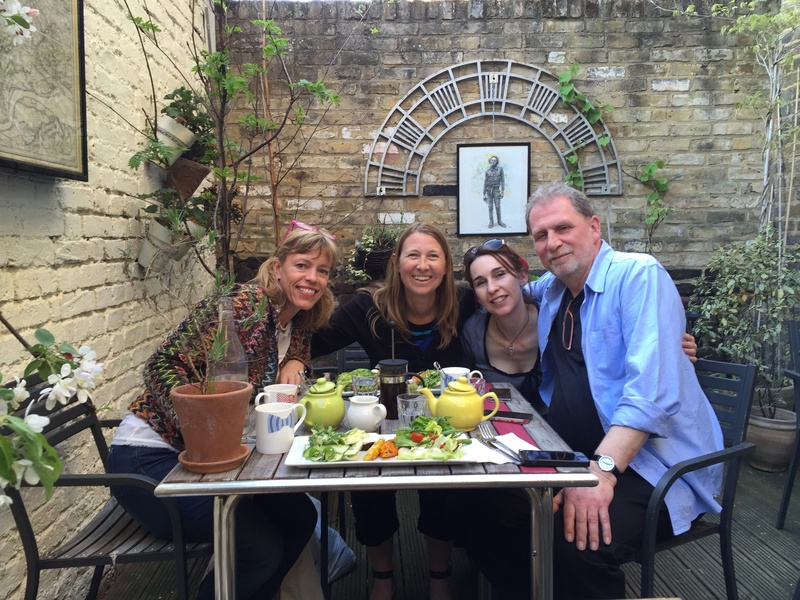